The rematch of Super Bowl 50 begins, the Panthers and Broncos take the field, and frenzied cheers hang in the air. Fellow fans fill the stadium as you take your seat on the 50-yard line. Except you’re actually sitting on your couch, and the only other living being in the room is your dog. That’s the power of virtual reality (VR). Technology experts dubbed 2016 “the year of VR,” and so far we’ve seen people rescue cats stuck on top of skyscrapers and fail at surviving a zombie apocalypse. But the sports industry isn’t just watching from the sidelines – the NBA, NFL, and MLB are all working with VR in many capacities. “It brings the in-venue experience to fans anywhere in the world,” says Max Grodnick, a business developer at VR sports broadcasting company NextVR.“That’s revolutionary.” But beyond offering you a great seat, VR offers even more revolutionary innovation. Consider the five ways VR is changing sports for fans and athletes.

1. The Best Seat at Every Game

NextVR has partnered with the NBA and Fox Sports to broadcast events in 360 video – they even broadcast them live. Grodnick believes that VR sports won’t replace gameday at the stadium, but it’s the next best thing. “The fact that fans can virtually attend any event from the comfort of their living room will be the greatest advancement in the fan experience since the invention of the 24-hour sports channel,” Grodnick says. Not only can it be viewed from your living room, but it can be viewed from living rooms across the world.

But the main benefit of VR sports is its immersive nature. “VR allows for a more ‘real’ experience than what we can perceive in a 2D environment,” says Julian Gill, a marketing associate at VokeVR. VokeVR is another key player in VR sports, and broadcasted the 2016 NCAA Final Four in VR. VR sports broadcasting also gives fans views that are normally inaccessible – like sitting on top of the basketball hoop or in the corner of a boxing ring.People within the VR sports broadcasting industry believe it will have a large impact on how fans watch sports games, but it’s still a new field. NextVR’s biggest obstacle is a lack of a substantial audience. Since it’s a relatively new medium, VR is less accessible than TV, and many potential consumers don’t know that it exists. The hardware is also an issue. Thanks to first-generation headsets, kinks such as low screen resolution still need to be worked out. Think about it this way: compare the first iPhone to smartphones today. The first iPhone gave birth to the 24-hour workday and made everyone a professional photographer, but definitely needed improvements (cracked screen anyone?). So do VR headsets.

Gameday delivers excitement — the crowds, hot dogs, and, of course, the game. But Fenway Park wants to add even more to that experience. They created three dugout-themed areas with VR headsets, which provide fans with a behind-the-scenes look at the Red Sox. The debut video features the team during spring training, giving fans a different way to follow their favorite players. Instead of simply impacting where people watch the game, VR also will impact how fans watch the game in the stadium, and the kind of content they access. And because of its ability to make fans feel like they’ve been transported to another place, the kind of sports shows and videos we see may change.

VR apps let you to carry VR sports with you everywhere you go. The Eurosport VR app allows fans to engage with content on and off the field. Users can watch Novak Djokovic train, tag along with professionals on the ski slopes, or experience an athlete pole vaulting right over them. Eurosport offers the most in-depth sports VR app, but others are trying to create new experiences too. LikeLive is creating a virtual space where users can sit together and watch the game in VR. So someone in New York could sit with their friend in Colorado and watch the game together. One of the main criticisms of VR sports has been the lack of social interaction between fans (who wants to go to a game by themselves?). LikeLive tries to tackle that problem and make VR sports a social space that transcends geographical boundaries.

VR isn’t just fun; it’s also big business. Grodnick notes that VR sports broadcasting has created an entirely new revenue stream for sports leagues, and they’re eager to capitalize on it. Because VR is accessible from anywhere in the world, they have an infinite number of virtual seats to fill. Still, it would be difficult to replace the actual experience of being in the stadium. “There’s still nothing like actually being there cheering alongside other fans,” Grodnick says. “This is the next best thing.” While that would expand audiences, it will also present new challenges. “As professional leagues like the Premier League (British soccer), the NBA, MLB, and others expand their audiences beyond their own country’s borders, those leagues have to figure out ways to engage with those new fans,” Gill says. The immersive and interactive nature of VR also lends itself to sponsorship and advertising. While VR advertising remains in its infancy, many companies are experimenting with it. Coca-Cola, for example, created a VR experience for the World Cup that allowed viewers to go through Brazil’s Maracanã Stadium, moving from the locker room out onto the field to play.

While Grodnick believes that VR sports will have the biggest impact on the fan experience, he admits that it can be helpful for athletes as well. Being able to go back into a game and review your moves is a step forward in athletics training. In 2015, teams like the New England Patriots, the Dallas Cowboys, and the San Francisco 49ers partnered with StriVR to use VR during training camp. Teams also use VR to film a game or practice in 360 video, and using a VR headset, quarterbacks and other players can feel like they’re back in the game and see what they did right or wrong.

“Anytime you give an athlete or a coach a competitive edge, they will be on board and find a way to squeeze every ounce of value out of it.”

University teams are getting in on VR athletics training as well. The Syracuse University football team uses EON Sports for its training. The EON Sports VR app, called SideKiq, creates a virtual environment where the quarterback has to make decisions in real time, like choosing a receiver for a pass. While the fans may not notice this innovation, it could impact how the game is played. Brendan Reilly, EON Sports’ CEO, says that players’ reported improved decision-making skills after using their technology. While these training techniques have been adopted mostly by football teams, baseball teams also are starting to use VR. Despite the increase in use as a training tool, VR’s impact remains small thanks to lack of accessibility and the price of VR headsets. Reilly says that EON Sports plans to make the app more mobile and realistic, ultimately creating a seamless experience. “We will continue to see it become more interactive and involve more real life scenarios,” he says. Even in its initial stages, Reilly says that VR training tools have been met with enthusiasm from athletes and coaches alike. “Anytime you give an athlete or a coach a competitive edge, they will be on board and find a way to squeeze every ounce of value out of it,” he added. 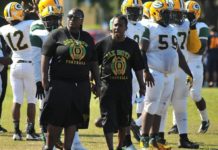 A League of Her Own: Florida’s First Female High-School Football Coach