Outside of the Niagara Falls Shopping Centre, groups of women in running shoes exited their cars and made their way toward the mall. Inside and around the center, various kiosks sold running skirts, wristbands, headbands, and t-shirts. Posters of Kathrine Switzer, the first woman to officially register and run the Boston Marathon, guided these women to an empty space that featured more posters of the running hero. The real Switzer, a few years older than her display-ready version and with dyed blond hair, greeted everyone with a bright smile. Switzer, 69, wore black Reebok workout pants, blue Reebok running shoes, a white t-shirt, and a Reebok jacket with the number 261, a nod to her sponsor and bib number from her first Boston Marathon written all over it. Her slender figure made her look taller than her 5-foot-7 frame. In one hand, she held Marathon Woman, one of three books she’s written on running (the other two were Running and Walking for Women Over 40 and 26.2 Marathon Stories). In the other hand, a pen scribbled autographs and generic messages for one of her hundreds of adoring fans. She leaned against a checkout counter. One of her staff members oversaw payments of $20 before handing books to Switzer for signing.

“We wouldn’t be here without Kathrine. Not even 50 years ago could women run in a marathon without being attacked.”

Once the line of fans reached between 40 or 50, she pulled away from her spot against the counter to address the small crowd: “I would like to invite you all to run with me next year at the Boston Marathon. It will be the 50th anniversary of my first run there,” she says and smiles to a nearby camera. After her announcement, she moves from person to person without a pause, shaking hands, answering questions, pausing for photos, moving, moving, moving. The crowd includes women who have traveled from as far as Florida and Georgia to be near her. They buy every book and every poster, and run any race that will get them one step closer to shaking her hand or taking a picture with her. In the span of two days, about 2,000 women and men showed up for the Niagara Falls Women’s Half Marathon, a two-day event that passes the Canadian Niagara Falls twice and seeks to empower women and provide them with a safe route to walk and run. “We wouldn’t be here without Kathrine. Not even 50 years ago could women run in a marathon without being attacked,” says Ross Robinson, NFWHM’s race director, as he looked over the crowds of people getting in line to meet with Switzer. He wore a red tie, which seemed out of place against his brilliant green t-shirt and khaki shorts. At the mall, some of the participants filtered through the various stands, finding their bib numbers and picking up goodie bags filled with wine bottles, official race t-shirts, and makeup samples. Many took photos with the blown-up version of the medals they hoped to earn, which featured a picture of the abolitionist Harriet Tubman. After the goodies and the pictures, runners had the opportunity to meet Switzer whose 261 Fearless foundation was served as one of the partners of the race. Few seemed interested in passing up that opportunity.

Switzer discovered her passion for running at the age of 12. Growing up, she played lacrosse, field hockey, and basketball, but her love for running outlasted those sports and followed her to college. She studied journalism at Syracuse University’s S.I. Newhouse School of Public Communications with the goal of becoming a sports writer and trained with the men’s cross-country team. In 1966 when Switzer transferred to SU from Lynchburg College in Virginia, sports existed as men-only clubs like many other universities in the country. Today, Switzer serves as a role model for female runners, but in college, she believed women’s lack of interest in sports was the primary reason for sports inequity. “I didn’t understand why women did not want to play sports,” she says. “I just thought they did not get it.”

But the 1967 Boston Marathon delivered some gender clarity. Switzer registered for the marathon under the name she used for documents and as her byline for journalism work — K.V. Switzer. It was not her intention to sneak into the marathon, but she passed undetected as the first registered woman in the Boston Marathon. A few miles from the starting line, Jock Semple, co-director of the marathon, decided to rectify this error. Her long, straight hair and the smiles most male runners gave her when she ran past them tipped off Semple. He ran after the 20-year-old Switzer, trying to rip off her bib number and remove her from the race. She describes this moment as one of the scariest of her life. Semple and the other co-director of the marathon chased after her while her boyfriend, Tom Miller, and trainer, Arnie Briggs, moved in to protect her. “I had a very big chip on my shoulder. I wanted to prove to people like Jock Semple that I too could become a better athlete,” she says. Some self-doubt shook that determination. “I really wanted to silence people who said I was a no-talent. But I also knew I had marginal ability. I knew I was not an elite athlete.” But she did believe that if she could finish a race, any other woman could do the same. Switzer finished the marathon in 4 hours and 20 minutes and was close to getting hypothermia thanks to the snow and sleet that day. Although, she finished and despite the rules that did not specifically forbid female runners, Semple disqualified and banned her from other marathons because she was a woman. That race and that moment shifted Switzer’s focus. She wanted to provide women with the same opportunities that men had in the running world.

That was 49 years ago, but fans still flock to see and watch Switzer. After meeting her last year, para-athlete Julianne Miskz, 18, developed a friendship with Switzer. Miskz credits Switzer for inspiring her to start running for the Saint Michael Catholic High School’s cross-country team in Niagara Falls. Her father, Joe Miskz, says Julianne found Switzer’s email and they began communicating. “She taught me to keep running and to do good,” Miskz says, holding two medals in her hands, a gold and a bronze. She finished the 2016 Provincial Cross Country Championship and came straight to Betty’s, a restaurant in Niagara Falls where Switzer was speaking with 50 fans about her goals in the running world. “The thing that would change somebody like Jock Semple’s mind was something called opportunity. I thought major corporate sponsorship, creating opportunities for women, getting them scholarships, getting them in the Olympic Games, and getting them their own events and getting them on TV,” Switzer says, outlining the goals that continue to define her. “If I could create opportunities, women would come and they would no longer be afraid.”

Those goals resonate with Lynda Albert from Brampton, Ontario, who has been running for 17 years and traveled to Niagara Falls to meet Switzer for the first time. On her 50th birthday, she ran a 50k, one kilometer for every year she had been alive and she completed her goal in honor of Switzer. Albert believes inequality between male and female athletes continues to be a critical issue and is frustrated by how the media portrays and engages women. “Ask [female athletes] about their training practices, their nutritional practices, what their personal goals are. Make it more like the questions you would ask their male counterparts,” Albert says. She looks up to Switzer because she fought to open up the sports field for women.

To this day, Switzer continues to fight. “Men’s sports are massive, women’s sports are very small because we have only begun to explore women’s potential and innate abilities,” Switzer says. She also counts empowerment as a key focus of her career these days. Switzer believes running improved her self-esteem, pushed her body and mind, and made her feel empowered to help other women. She wants to demonstrate to others that running can do the same for them. “I don’t crave admiration because it makes me feel terribly responsible for people,” Switzer says. “When hundreds of people are sending you an email and telling you that they’ve been changing their lives and it’s all because of you, you can’t ignore it. It’s irresponsible; you have to step up and help them move on.”

Back at Betty’s, the 50 fans and the race organizers left Switzer’s private dinner and the restaurant’s lights dim as waiters moved between empty tables with dirty dishes clustered on top of the other. Switzer sent everyone home, wished them a good night’s sleep before the race, and advised them to be fearless. The table candles sat flameless and the smell of pasta, fish, and parmesan chicken still hung in the air heavily. Julianne, the medal-clutching fan from earlier in the day, is the last to go.  She and Switzer hugged and fist-bumped before promising each other they would train together for Julianne’s first half marathon. After Julianne left, Switzer hastened around the room while her husband and world-record runner, Roger Robinson, 77, helped the waiters pick up the last glasses of wine. She removed the posters, including a wall-high poster of herself from the corner that promoted her and her husband’s books. She pulled away the nearest and busiest person from their table to help her roll the posters into her bag. It is 10 p.m. She and her husband said a final goodbye to the room and marched out, carrying bags of books and promotional material. Tomorrow, they will be at the race at 7 a.m. to greet runners. As she walks away, it’s difficult to imagine her stopping to sleep.

Kathrine Switzer believes that running a marathon is an empowering experience for women. To highlight that belief, she frequently partners with other organizations at individual races to spotlight groups seeking to overcome barriers — be they because of gender or race. At Niagara Falls Women’s Half Marathon (NFWHM), one of those groups was Black Girls RUN!, a nationwide organization with several chapters in each state that seeks to get African-American women on their feet. Ashley Hicks-Rocha and Toni Carey started BGR! to increase African-American representation at races, and they partnered with Switzer’s 261 Fearless Inc. to reach more women. “When they were participating in races, they didn’t really see a lot of people who looked like them,” says Leslie Pender from Florida, who traveled to Niagara Falls in order to participate in NFWHM. “Every time you go to a race, you’re going to see someone from Black Girls RUN!”

While BRG! encourages African-American women to run in order to increase representation at races, it also focuses on improving their health. According to the Center of Disease Control and Prevention, 47.8 percent of African Americans are obese, the highest rate of obesity in the country. About 100 BRG! members from around the country showed up to run the NFWHM. They danced and cheered at the starting line, braving high winds and rain to claim their Harriet Tubman medals at the finish line. As they prepared for the race, Wilma Morrison, an advocate for black history in Niagara Falls, spoke out to the crowd, “Keep celebrating our good woman, Harriet.” 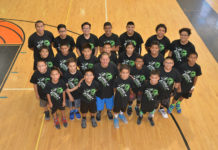